On the Friday 23rd February I had the pleasure of holding a paranormal investigation at the Morecambe Winter Gardens, Morecambe Lancashire. My first thoughts on the place as we pulled up outside was, wow, what a beautiful building. The only time I have seen the building was the image I used to advertise the investigation nor was I ready for what was to greet us as we walk in with our equipment, in what can only be described as a coffee shop and not the main entrance.

Once in you was just in awe of the size of the place and also the hidden beauty of the decor, although in places it was clear that it had started the to decay in areas, yet the architecture was lovely and you could quit easily imagine what it was like in its heyday. Sadly, a lot of the seating has been removed and the only existing and original seating that remains in in what is called the gods, at the highest circle.

Once all the cameras were in place and recording and the quest had arrived, we started the evening of with a very quick guided tour of the Gardens as it is known.  It became very clear that you needed to farley fit as there are alot of stairs and we did a lot of running around the building. As with all investigation I held an opening and protective prayer to start the night of to make sure that we are looked after. We only managed to bring four out of our eight static night vision cameras with us and were located on the upper circle, stage front, bar and under the stage. I was also using a new audio toy called the SR3D binaural mics that were inset into the cast of my own ears and then into a dummy head. As the mics are so sensitive, they were located in the center of the auditorium facing the stage as they would be able to pick up any noise from anywhere in the theatre.

Please note, any names, dates and information that is given by spirit will not be mentioned as I do not want future guest knowing and it spoiling their visit.

We moved from location to location within the gardens, and in one of the many bar areas we picked up on different individual spirits, a male and female and also children. We did many different types of experiments on the night from, table tipping to mirror Scrying and human pendulum.

In one of the changing rooms, we settled down to try a bit of scrying, we first had one of the men on the night sit in front of the mirror with a small torch shining from under his chin. we could see small changes that could be deemed as spiritual and we also became aware of his eyes becoming very dark, some was saying they went black.  However, as I looked further up the bench I could see the spirit of a female sitting looking very upset and with her head resting on her chin looking at herself in the mirror . So I got one of the ladies to sit where i could see the spirit, which turned out to be one of the best sacryings I have witness. Through careful coaching I got the lady to relax and to bring forward the spirit where we could see the changes to the reflection in the mirror. First thing to note here is that in the beginning the lady that was doing the scrying, her eyes kept blinking, yet the more she relaxed the less they blinked, she also had a nose ring that seemed to fade away  the more relaxed she got. After no more than a couple of minutes we could see the makeup of the lady and then a different hairstyle to one the lady wore.

Things rapidly changed and as I was standing immediately behind her, I had a very clear view of the reflection and of the spirit looking back at us and of the event that was about to take place. The spirit of the woman whose reflection we had been watching,  suddenly jumped up and leaned out of the mirror. This in turn scared the lady that was sitting, so she let out a huge scream that triggered nearly everyone to jump, scream and run for the nearest exits, including her boyfriend. Luckily I didn’t budge and as I was standing behind the woman, I could catch her and calm her down and take control of the situation. Reviewing this, we all ended up laughing but amazed at the way the spirit came forward and we knew that the spirit didn’t mean to cause those to be scared nor mean us any harm.

After a short break, we headed under the stage to conduct an energy circle. Holding hands and in nearly complete darkness, apart from two red lights of voice recorders and the small green light from K2 EMF meters. during this, we notice that one of the red lights kept blinking irregular and also in time of when a question was asked. this went on for sometime as the spirit corresponded by make the lights flicker, one flick for yes two for no ect. We also started to notice that one of the ladies became very quiet and was swaying an awful lot. It’s at this point in making sure that she was OK that we received our class one EVP.

Below is the evp taken from that very moment when the lady was asked if she was OK, however, the response that was recorded was not from anyone in the room, well not in the physical world. There are two voices that respond to the question, a females and a males but I want you to decide what they are saying.

At one point we were all at the top level of the theatre called the Gods looking down to the lower floor and the stage and talking amongst ourselves, when one of the guest asks out loud that if there was a child there to make a noise. The clip below is the audio taken from the SR3D dumby head mics, connected to a Zoom H1 digital voice recorder that was on a tripod on the ground floor of the auditorium. please take a listen as you will hear us all talking and the guest asking for a noise, and the intelligent response, you will also notice that not all of us hear it as we are talking or laughing.

I have had to look through and listen to hours of footage and audio as there is always a chance that we don’t always hear stuff that is going on around us as we might be taking part in an experiment at that time. In the video clip below taken on a Sony PXW-X70 semi pro camcorder whilst we started to use the P-SB7 Spirit Box. You will here hear the white noise coming from the voice box. However there is a ringing sound that wasn’t audible to us and only comes through on the recording, you can tell that we don’t hear it as none of us react to it.

Late into the night, we all went for a last break and made our way back to the “base camp” tea room. It was at this point and again without us knowing the SR3D dumby head mics picked up an unknown mans voice shouting a command at us. Once again we we don’t react to it as it wasnt audible to us. Please take a listen and see if you can work out what he’s saying in the audio clip below, the voice is around the 00.09 mark.

To finish the night off, we decided to return to the area on the top floor and to where the whistle sound was heard to see if we could get spirit to move one of the seat in the “God” area. Although this didn’t happen, you can hear me ask if they were happy. Soon after the sound of music coming from the ground level was heard. Take a listen to the clip below and see if you can work out the the song or what music it is.

As with every investigation, the safety of the guest are my main priority and I always insure everyone is safe before, during and after an experiment.  With regards to this energy circle, it was seen better to finish and move away from the area and to make sure the woman that was being effected was OK and well, which indeed she was.

We held further experiments through the night and heard lots of bangs, taps. at one point when communicating with a child, the sound of someone whistling in the same area could be heard and was indeed pick up by the SR3D mics.

It was a great night and after the closing prayer and an offering of thanks we finished the night. Morecambe winter gardens was a place that in its heyday would of been a wonderful place to have visited, yet it still holds a charm and wonder and can feel your imagination of what a delight it would have been. Even in the dead of night, Morecambe winter gardens captivates you and pulls you in to the dreams of those that performed there.

Below are a few of the still photos that have orbs or light anomalies in them, taken on the night of the investigation, you will have to zoom into some of the images. When we use the digital stills camera, we always try and take two consecutive photos as it will show the differences and any movements that are capture that we cannot see with the naked eye.

In the four photos below you can see what are believed to be orbs (contained spirit energy) and the movements of them. 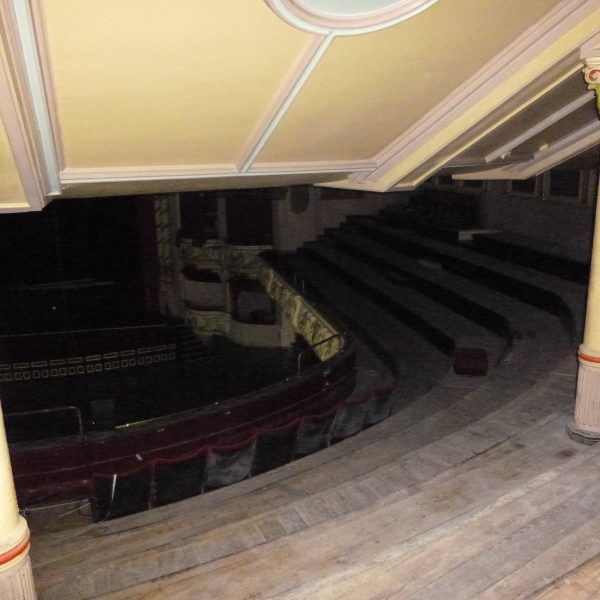 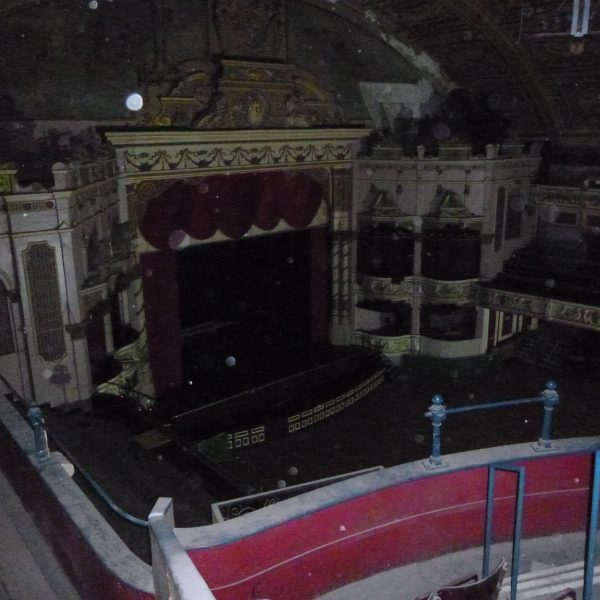 View from the gods with multiple orbs 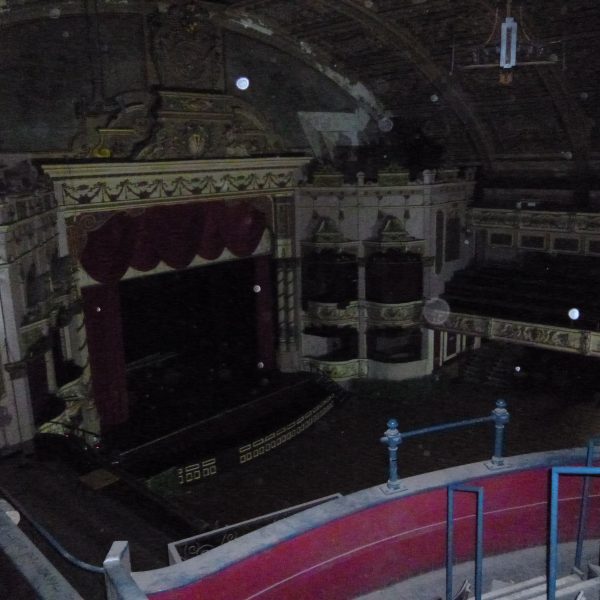 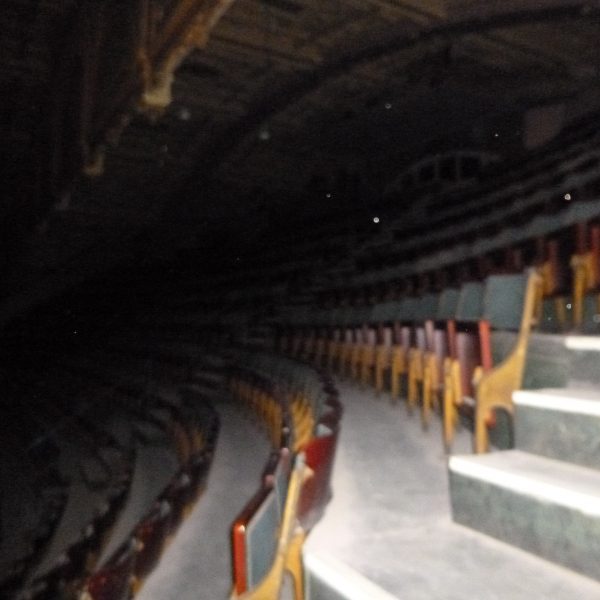 Orbs in the gods area 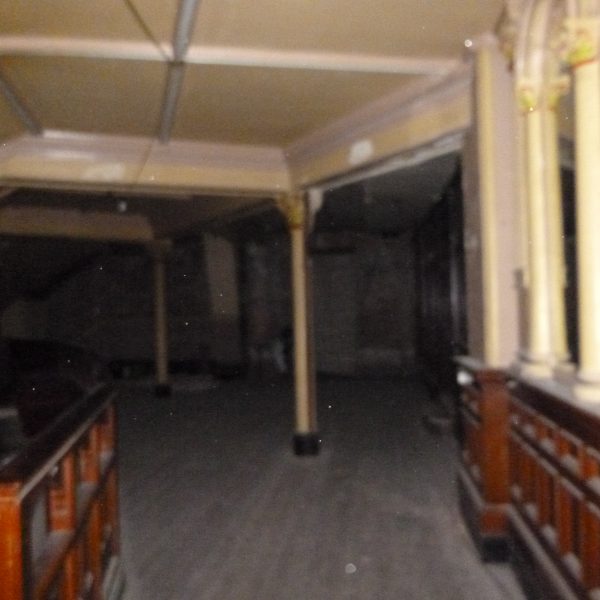 Light anomaly near the ceiling beam 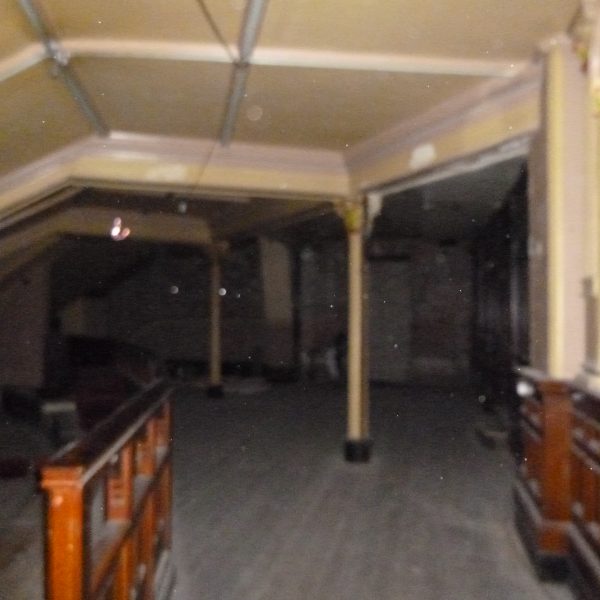 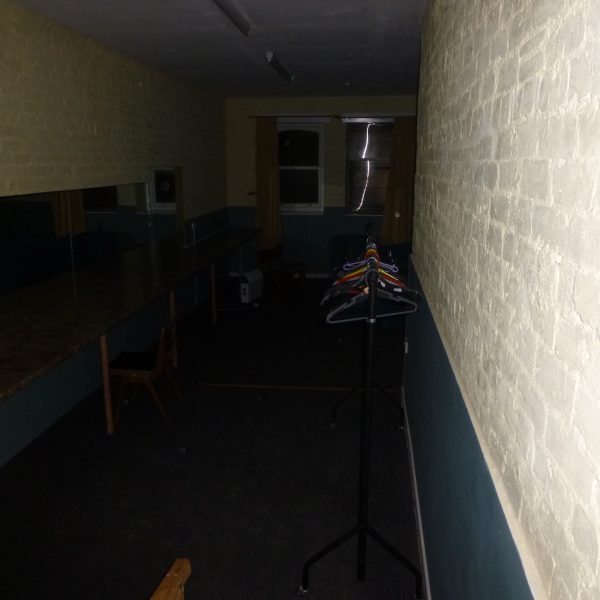 Orb movement from the right 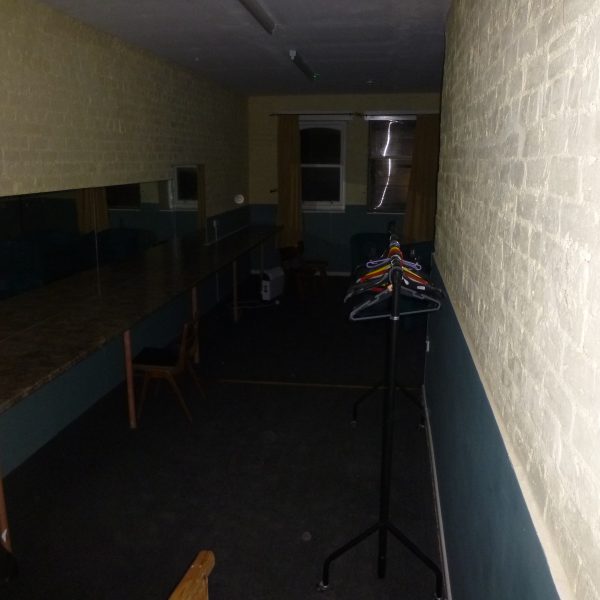 The same orb travels to the left 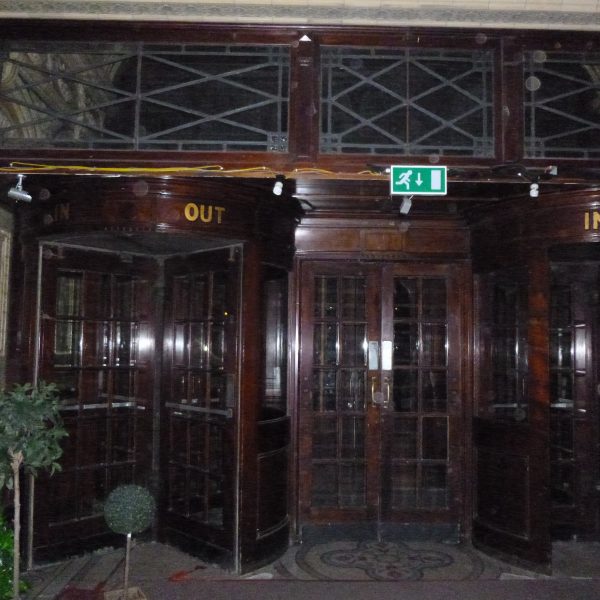 Orbs in the lobby area 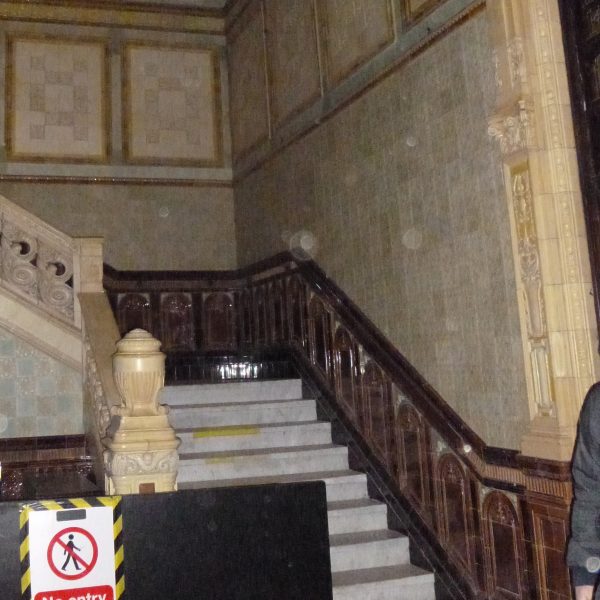 Stairs in the lobby up to the circle 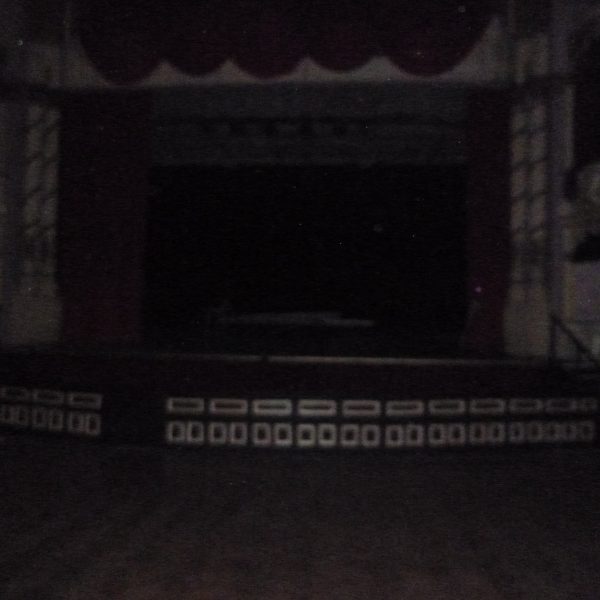 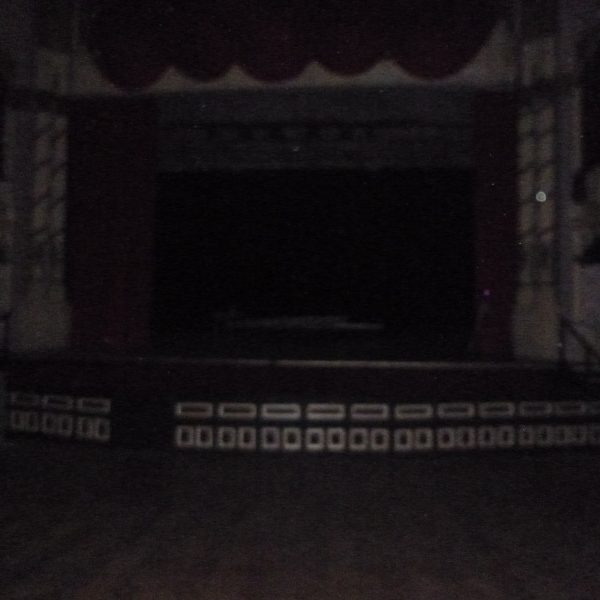 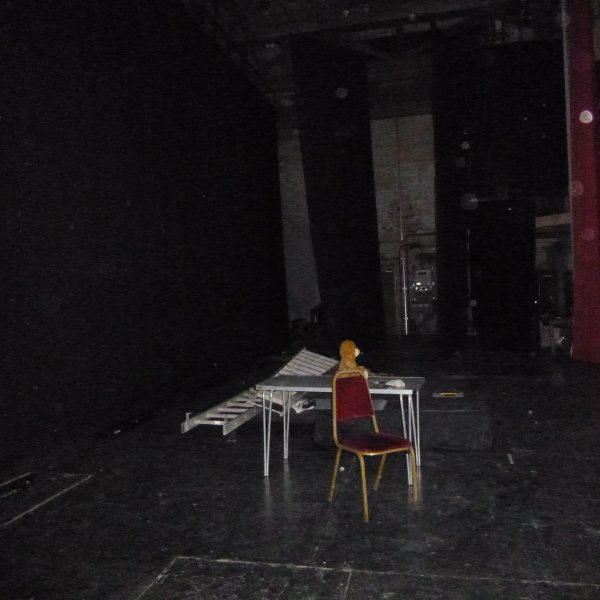 Please be assured that nothing is set up or faked for my investigations and the sounds made in response to questions are intelligent EVP (electronic voice phenomena).